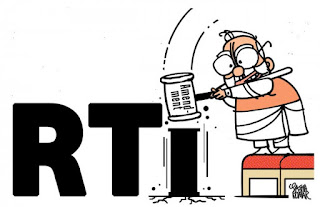 The Right to Information Act of 2005 was a path breaking legislation in the history of the Indian republic. Under the provisions of the Act, any citizen of India may request information from a "public authority" which is required to reply expeditiously or within thirty days.

This Right to information Act, 2005 was a replacement of the Freedom of Information Act of 2002. This was a powerful piece of legislation that empowered the people of the democracy. Everyone welcomed it, the public, the media, the bureaucracy and even the political diaspora.

Well, recently... that is about 10 days ago on the 19th of July, THE RIGHT TO INFORMATION (AMENDMENT) BILL, 2019 was introduced in the Lok Sabha and within 4 days of its introduction, which includes a weekend, the bill was passed without much discussion and any changes to the proposed bill. Here's the PDF of the Bill as passed by the Lok Sabha on the 22nd of July, 2019.

The Bill was introduced by Jitendra Singh, I'm guessing he was wearing his MoS of PMO hat while introducing this bill. Just 4 MPs of the house, namely Adhir Ranjan Chowdhury,Sougata Ray, Shashi Tharoor and Asaduddin Owaisi opposed the introduction of the bill and said there were clarifications that they sought from the minister.

While Adhir Ranjan and Sougata Ray spoke of not enough bills being referred to a standing selection committee for further scrutinizing and refinement, Shashi Tharoor spoke about the RTI institutions and commissioners losing autonomy, and Asaduddin Owaisi went into technicalities and spoke of the bill lacking legislative competence.

There were give and takes hurled to and from the opposition and the government at each other. The opposition sticking to its stand of wanting to send the bill to a standing committee before the introduction in the house and the government standing firm on its take that there were not enough valid reasons to send it to a standing committee. At this point Asaduddin Owaisi raised a request for a division in the house - basically a vote, and as it turned out, the house stood that Ayes 224; Noes 9; and hence the bill was introduced.

The bill came up for discussion with N. K. PREMACHANDRAN MP from Kollam raising a concern that he had proposed amendments to the bill but that has not come up for consideration. The minister Jitendra Singh brushed it off.

The same bandwagon of MPs from the opposition spoke against the bill and urged the minister to withdraw the bill. While Shashi Tharoor said the amendments would make the RTI a toothless tiger, Sougatha Roy quoted american presidents to coax the minister to withdraw the bill. There were also members like Jayadev Galla and Sunita Duggal who accused the government of strong arming its way into moving bills with its sheer majority in the house. There were also Members like Asaduddin Owaisi and Raveendranath Kumar who spoke of how the amendments would mess with the autonomy of the RTI institution and the chief Information commissioner.

After 4 o clock the MPs just went into overdrive with the opposing ministers just taking turns again and again to talk about the same things. Finally, the member from Kollam, N K Premachandran went on to call it the blackest day in the legislative history of India because his amendment request was denied without consideration and that the government was going to pass a bill because of its sheer brute force of majority. He even went on to cite supreme court judgement and called it an insult to judiciary. The government sat in stoic silence though all this.

Finally the announcement for the division of the house was made at around 5:40 PM and the bill was put to vote. With a result of 218 Ayes against 79 Noes the bill was passed in the lok sabha with a total discussion time of 3 hours and 52 minutes. The bill was then sent to the Rajya sabha where it went under further trials and tribulations.. that story is for another day.

Why doesn't a PMB become a law?
Its kinda common sense. How can the party in power support an idea introduced by someone not in government? Wouldn't it look bad? But what it if was genuinely a good idea?
Well in that case, the government or the minister who's purview this bill falls under will raise and try to convince the member to withdraw the propose. The minister or the government would then say that they would introduce this bill from the government's side and that would have higher chance of becoming a law. Ofcourse the gullible member does withdraw the bill and the government forgets that it had made a promise. Hence it never sees the light of day.

It might not come as a surprise that no PMB has become a law since 1970. There were a few Bills that either passed in Lok sabha or Rajya Sabha, but none of them have crisened as law of the land. The last PMB bill to pass either of the house was in 2014 introduced by Tiruchi Siva. It was the Rights of Transgender Persons Bill, 2014. It was passed in the Rajya Sabha. You can find the bill here. 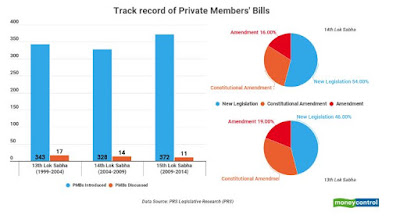 Here's an interesting insight into how Private Member Bills perform. Its a well written article on Money Control.

Posted by Dr Timepass at 3:05 AM No comments:

Questions:
The day like always started with the question hour. There were 20 questions from various MPs that requested answers from respective ministers either verbal or in written. There were 230 other questions that expected answers in writing only. These are generally detailed reports and descriptive essays with numbers and other points of facts.
Its not surprising that there are so many questions. In general, an average MP poses about 600 questions to the house. Top performing MPs might even ask as many as 1200 to 1500 questions in one term at office.
Today’s questions were mostly posed to Health and Family Welfare, the minister was asked 8 questions, but all the questions were answered orally by the minister. The questions ranged from lack of MBBS doctors to use of Artificial intelligence in Public health. Not surprisingly 77 questions were posed to the Minister of Health and Family Welfare that required to be answered in writing.

Papers laid on the table:
Nothing really interesting here, just notifications of different things in the Gazette of India. Official reports and reviews of different central institutions like AIIMS, Central Silk Board, IITs etc etc
The only thing that caught my eye was that the Ministry of AYUSH has laid a paper with its demands. Not sure what these demands are, maybe we can look it up.
Statements:
Meh, no great statements. The Health Minister made a couple of statements about implementation of the recommendations certain standing committees.

Motions:
The Health minister proposed 3 motions about electing people to different medical institutions like the JIPMER and PGIMER, and a central supervisory board.
There was a similar motion by the Minister of Environment about election of members on the Tiger Conservation Authority.

Discussion on Union Budget:
There were a few MPs who wanted to demand a grant. Basically they were not happy with the railway budget and wanted a closer look at it. So they asked for a further discussion on the Demand for Grant No. 82 under the control of the Ministry of Railway. There were about 21 MPs who supported this motion for demand for grant. This was put to vote and negatived. So the housed moved on.
After a break the house convened again

Government Bills:
The first Bill to be moved was the Central Universities (Amendment) Bill, 2019. This basically says there would be new central universities built in the nation. First of which will be built in Andhra Pradesh. A central university and a Central Tribal University. These two universities will be ready 4 years and will be set up in 1400 Crores. Neat!
There were a few MPs who participated in a debate. Incidentally, the Bill was taken up for debate clause by clause and finally the bill was passed in about two hours.

Private Members Bills:
45 Bills were introduced by different members stating from Martyr’s Families to Coaching classes regulation to board of flood victims. (List of Bills introduced here)
Out of the 45, just one of them was interesting enough for the members of the house to talk about. It was the Compulsory Voting Bill, 2019. Doesn’t sound interesting? Interesting yes, but I don’t think it can actually be a law. I mean I don’t see it happening, and so did the members of the house. This Bill was put to discussion and 3 Members had spoken about it when the clock struck 6. Its Friday, so the members packed up and left.
That was Friyay!

Posted by Dr Timepass at 3:37 AM No comments: